Standing Beside You & Fighting For You

→  → Should Women Athletes be Forced to Take Hormone Therapy

Should Women Athletes be Forced to Take Hormone Therapy 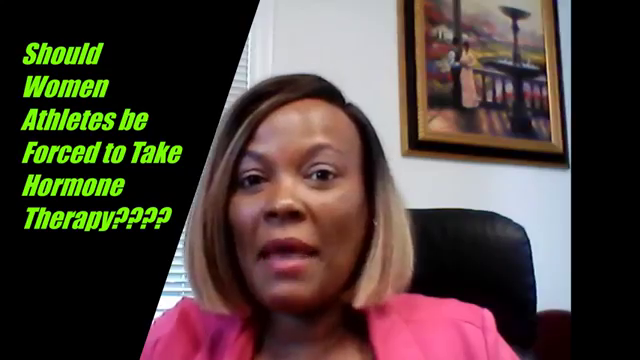 Hello, I’m Jacquie Jones, of Jones & Associates Law PC and Jonesing 4 Justice, the podcast. And this is take five, take five. Because I had been trying to do this video, I did it three times yesterday and this is my second tape today. And maybe someone is trying to keep me from recording, but I will do it via a Webcam and I will deal with it later. So why is this so important that I talk about it It’s important that I talk about it because it’s an issue facing not just women, but sports in general. So we’re talking about rules. Surrounding, women in their bodies, not transgender women. Um, biological women. And why am I saying this Because the rules that I’m actually talking about, people think of as a transgender role that actually, and this case is not being applied in that way at all.
So if you know anything about me, you know that there are some sports that I enjoy and I enjoy watching women in them. One of them is Ice skating. I mean figure skating is a beautiful thing and women doing that, it’s amazing. Thinking back to my childhood, there w who has made a resurgence in popularity with some new documentaries out there. And I always thought that she was great and athletic and wonderful, and she was doing black flips. Even men couldn’t do it. And they were saying she wasn’t grateful enough and she wasn’t, you know, in the vein of the sport, which was bs because the sport wishes that they had that kind of athleticism. And nowadays they want more and more people can do more athletic feats. Uh, but that was always an issue about what it meant to be a woman.

Now I understand that women and men should be separated in sports for obvious reasons. Um, the fastest, strongest man is going to be stronger and faster than the fastest, strongest woman. As a general physiological thing, our bodies are different. It doesn’t mean there aren’t great and amazing female athletes. There are 100% are. Um, but I understand why these sports are separated. That being said, um, issues have come up as it relates to around to transgender, uh, athletes. But this is not even about that. And so the way that, um, the international athletic is something I am, whatever, the way that I decided to deal with these roles around women is basically to say let’s determine what feminine the womanhood is. Yes, we already know that people were born biologically male or woman, but they are now making determinations, not they still what your physical parts are, your sex and what goes along with it.

They have decided they’re women athletes must have less than a certain amount of Sasha and their system. And I think that that became something that really came to play as it relates to the specific South African athlete who was a woman. The biological woman who lives as a woman in competes is a woman and who naturally has higher than average, um, levels of testosterone. Now mind you, there’s one study that they’re basin on the talks about, um, you know, these things and as a result they created a set of roles that would eliminate this woman from being able to participate in sport that she dominates 800 meters specifically. Um, because, um, her body naturally that’s something different than what they think average. People do. Think about how weird it is. The average woman is not an elite athlete. I mean, I know that if I ran 800 a lot, first of all, I wouldn’t run the 800 because I don’t think I can run the 400. I can walk the 800, but I can’t run it. So, you know, I don’t feel like I should be part of what average women are anyway as far as when it comes to a lead athletes, we’re not on the same plane.

We’re not on this. I’m not even in the picture. Um, as she is. So it is ridiculous. And talk about what average women do then. Even if you talk about average athletes, um, you’re conditioning your body shape, all those things are or different. So the fact that they are telling this woman that in order for her to compete and the sport that she has dominated word and she’s good at, as a natural woman, what she is is that she’d had to take actual hormones to lower her testosterone level. I’ll call bs and the play, hi, I’m drinking. I had the my Disney Women Villains Cup because somebody is a villain here and whether it’s guerrilla Deville or Ursula, the witch or the Queen, and this case is the IAAF and the court. The international court that said they were okay to discriminate. In fact, they basically said, yes, we agree this discrimination. We just happen to think this discrimination is okay in order to protect the integrity of women’s sports.

There is no integrity in the sport that says in me as I am, as a woman is not good enough or it’s too much or not enough. Because see that’s what they’re saying. Well, she has too much this past summer when she’s too much of this, which means she’s not enough woman. She’s not enough. That, and quite frankly, I am sick of men determining what is and what’s not appropriate for women. If God made me this way, this is who I’m going to be.

And if God made me elite athlete, I’d be running a 102 girl’s sister. I’d be end those Olympics, like watch affect the way my daughters are supreme athletes been, you know, thinking about, in fact, I’ve been practicing for years. Um, my face and my, my cry when they win the Olympics because you know, they do the commercial with the moms. It kind of goes like this.

Yes, I’ve been practicing. Now are my kids going to make it to the Olympics Likely not. But I mean the abilities in ways that I don’t and that, I mean right now my daughter is the hae and the other ones also running. So maybe they’d be, this will be the thing. It wasn’t gymnastics for us. It wasn’t soccer, it wasn’t a basketball. But maybe, maybe track and field can be our sport. They’re in high school. It can happen. But the long and short of it is if somebody says that it’s okay to keep poking and priding my children because we want to test their womanhood,

I’m not happy. And you know, mommy l for free. So we might be in court too. Um, I think it’s interesting. I mean you look at athletes like Michael Phelps was the goat when it comes to swimming. I love that goat greatest of all time and he apparently it makes some kind of extra lactic acid or something like that will supposedly gives him an edge when it comes to his swimming. He also has an abnormally long feet right there, practically flippers and you’re seeing them, which may also give them an edge. Does anyone say that he has to reduce the amount of lactic acid that he produces Does anyone say that he has to cut off a couple of toes, his toes, her more length Other peoples No, because it’s okay to be a man and be a high level athlete and use your natural body ability on top of the work ethic that you put in to create a great league athlete.

But for some reason a woman who takes her natural body ability and puts it with the work that you have to put in and becomes a great athlete. Suddenly she should be taking therapies, which by the way have other side effects. It might have been harm her in general, but could make it to that she can’t even compete with the silo. It’s ridiculous. It’s ridiculous and it should not stand. So what do you think about this I’d love to know what other people think. I mean, I’m not going to agree with you if he thinks something else, but I’d love to know what you think. In fact, there are people out there who think, no, she should not be able to compete with women. Then what does she compete with men Because she is not a man. She’s not a man and she doesn’t have all the physicality of the man. And it goes back to a lot of prejudices that I think, um, have been incumbent upon much of our world for a long time. When we determined that certain people, um, should be a certain way. If you get my thinking. So what I’m going to do is sip my tea and think about all the villains out there. You don’t deserve Caster Semanya. You don’t deserve her. She is out there and making the world great for women runners running fast, being who she is, giving great, great pride to South Africa, which they deserve for having created this wonderful writer and their myths. And the world is out there trying to find ways to keep her down. So sister girl keep your head up. I support you. and you let us know what you think. This is a short episode because I have recorded five times now. But you let us know what you think.